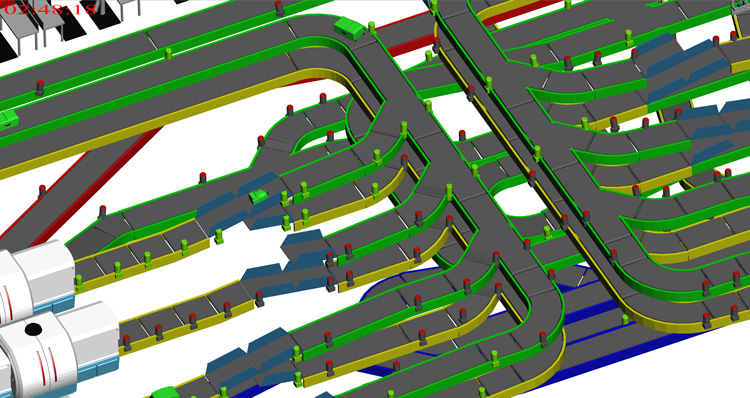 Conserving energy is a goal for every baggage handling system. Although BNP has been working with airports to implement energy saving policies and infrastructure long before the current health crisis, the reduction in baggage volumes associated with COVID-19 highlights the importance of having energy efficient systems.

In many of today’s baggage systems, energy is wasted when conveyors operate while no bags are present. This is due to the baggage handling systems being designed with a Zone Methodology approach in which a group of conveyors are started at the same time and run continuously until the zone has been cleared of bags for 10 or more minutes. This results in running many conveyors unnecessarily during low demand periods. When bag volume is low, there is a poor return in energy consumed compared to the number of bags handled.

Enhanced drives can start and stop conveyors with essentially no detrimental effect on the drive system while greatly enhancing equipment life and reducing bagroom noise levels. Enhanced drives can make the overall system or process more energy efficient by only using the motors when required or tuning the motor output. Running conveyors only when bags are present is referred to as a “Small Group Methodology.” Enhanced drives include, Variable Frequency Drives (VFDs), Permanent Magnet Motors (PMMs), and Synchronous Reluctance Motors (SRMs) C-faced coupled to a gear box. Combining enhanced drives with industrial ethernet connections and modified distributed I/O methodologies provides for the opportunity to design systems that achieve substantial energy savings.

BNP has evaluated the Small Group Methodology as an option for the replacement and upgrade of existing systems. The theory is simple, only run a conveyor when a bag is present and don’t run the conveyor when it is empty. The logic implemented for Small Group Methodology will turn the motor on at a fixed location prior to the bag reaching the conveyor and will turn the motor off after a fixed time after the bag exits the conveyor, if no other bags are present.

Simulation modeling was used to estimate total daily power consumption for multiple conveyor time-out delay settings. This study was performed at a major hub airport in the United States and included the flow of originating bags from induction at ticket counters through delivery of all bags to the final makeup devices. Operations including ticketing, baggage screening, explosive trace detection, and manual encode were modeled, incorporating all conveyors, merges, and diverters from induction to makeup device for the outbound baggage handling system. Study results project that systems that implement the Small Zone Methodology would see up to a 59% reduction in energy costs. Additionally, the airport would benefit from further cost savings associated with the reduced wear and tear on system components.

In Zone Methodology, all the conveyors in the zone are restarted at the same time with only brief cascade restart delays between conveyors. All the conveyors in a zone were set to run continuously until no bags were seen in that zone for 10 minutes. This resulted in running many conveyors for an extended time, even during low demand periods.

Figure 1 shows an example of a conveyor line running using the Zone Methodology. If a bag enters the ticket counter in Zone 1, all twenty conveyors in Zone 1 are restarted. When the bag reaches the Zone 2 auto-start trigger photo-eye, all forty conveyors in Zone 2 are started. Each zone will continue to run for approximately 10 minutes after the zone is clear of all bags before auto-stopping. If another bag enters the zone in that period, the timeout timer is reset, and the conveyor must run for 10 minutes without any bags before the zone stops. 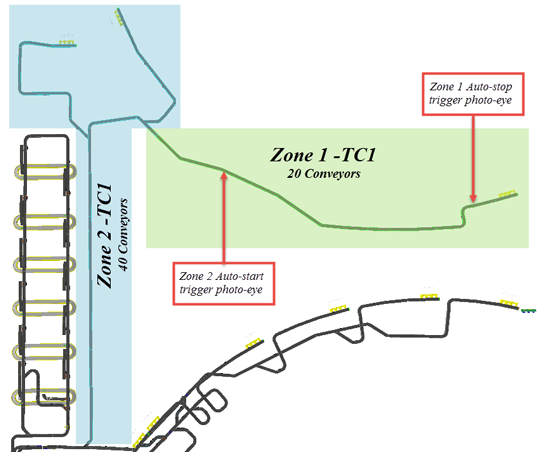 The use of enhanced drives throughout the BHS along with the Small Group Methodology eliminates the need for conveyor start/stop zones. Enhanced drives allow individual motor control, ramped start and stop of conveyors, and adjustment of the motors to the current process load, creating more efficient conveyors.

The logic implemented in the simulation consists of a variable time-out delay that will turn off the motor after the last bag exits the conveyor. Various time-out values from one second to 10 minutes were evaluated to understand both the impact to energy consumption and the frequency of conveyor stoppages and restarts.

The daily run time for each conveyor is determined by monitoring each conveyor’s status throughput the simulation. Under the implementation of the Small Group Methodology, each motor will start at a constant time before a bag reaches the charge end of the conveyor and will stop running following the timeout delay after the bag has completely exit the conveyor. The conveyor will continue to operate if another bag crosses the startup PE before the timeout delay expires.

The formula for computing the daily runtime where each conveyor is its own Small Zone with (for “N” conveyors in the system) in operation over a day is as follows:

Runtime After Bag Exit i,t = time t conveyor i continues to run when empty 1) after a bag exits conveyor i before the time out delay expires, or 2) another bag passes the controlling startup PE.

The simulation generates the run time in minutes for each conveyor, as well as the number of times each conveyor is started each minute. The required horsepower for each conveyor is calculated using BNP’s modified CEMA (Conveyor Equipment Manufacturers Association) standards. Using the conveyors nominal horsepower, the daily runtime energy in Kilowatt hours (KWH) is calculated. This formula includes a penalty for the energy used by a conveyor during startup (typically for NEMA B motors) and the startup time required:

Both the Small Group Methodology and Zone Methodology for the proposed BHS was modeled over a twenty-four-hour period using projected flight schedules and demand levels. The total energy consumption and corresponding average startups per conveyor for each timeout delay over the entire day are provided in Figure 3. 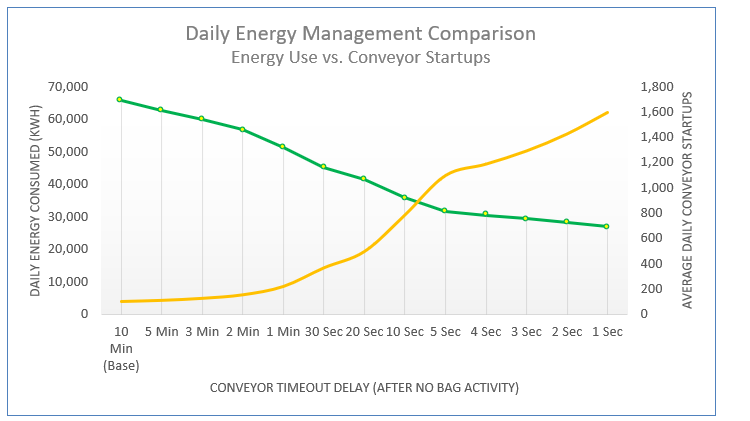 The simulation modeling demonstrated that substantial energy savings can be achieved by implementing a Small Zone Methodology and turning motors off when bags are not present.

As the timeout delay is decreased, the daily energy consumption reduces since conveyors run for a shorter amount of time. At a one-second timeout delay, the Small Zone Methodology provides an estimated 59% power and maintenance cost savings compared to the Zone Methodology with a ten-minute zone time out.

BNP is a worldwide leading provider of specialized design and consulting services to the air transport industry. We offer expertise in designing new baggage systems and designing upgrades to existing baggage systems to improve operational efficiency and performance.